Sale on canvas prints! Use code ABCXYZ at checkout for a special discount!

How this view almost killed me

Previous Next View All 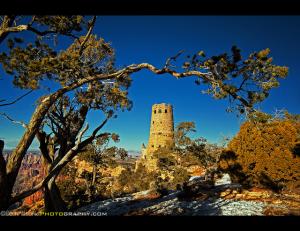 I am finally posting a photograph that has been residing on my hard drive since 2008. This was from a not so productive photography trip I took to Grand Canyon National Park in Arizona. Perhaps I am sharing this since I will be leaving for a backpacking trip to the Grand Canyon this Friday.

Or it could be that making this photograph nearly killed me.

Let us backup for a moment.

I started 2008 with many ambitious goals to photograph as many iconic landscapes throughout the American Southwest as possible. First on my list was photographing winter landscapes at the Grand Canyon. I was there for four days and from a landscape photography point of view it was a bust because the entire time the sky was a uniform blue and devoid of any clouds (as you see in the photo).

After photographing from all the popular viewpoints (i.e. Mather and Yavapai Point), I tried my luck as lesser known and less crowded viewpoints. One area I have seen photos of is the Desert View Watchtower located near the eastern entrance of the park.

The watchtower is a 70-foot four-story stone structure that was designed by American architect Mary Colter, who also designed many other buildings in the Grand Canyon such as Hermit's Rest and Lookout Studio.

After I toured the interior of the tower I walked outside to scout for a composition for a sunset shot. Immediately I started getting a sharp, stabbing pain to my abdominal region. I bent over in pain and fell on the cold ground as I silently screamed in pain. After whimpering like a little baby, I managed to stumble back to my car. Sitting in the driver’s seat things only got worse. It was still a good 20-mile drive back to the Grand Canyon Village where I was staying, but I was in no condition to drive. After gritting my teeth for five unbearable minutes the pain suddenly subsided. Common sense would dictate I drive back to my motel room and seek medical attention, but my unreasonable photographer mind said I needed to stay to get that sunset shot! I wasn’t going to let a stomachache dictate my time at the Grand Canyon.

So what did I do? I got out of my car, grabbed my photo equipment and composed this shot. I still had about two more hours until sunset so I figured I would walk around and find more creative compositions, that is until the stabbing pains came back with a vengeance. Once again I stumbled back to my car where I started to sweat profusely as a result of a flu coming on. I passed in and out of consciousness for the next two hours while laid out in the backseat of my car.

So after all this you would think I would contact somebody for medical help?

I gathered up what remaining strength I had and setup for a sunset shot. In the end, the sunset was terrible and so was my condition. To this day I still don’t know how I did it, but I managed to make the 20-mile drive back to my room where I promptly passed out.

The next morning I felt drained, but much better. I finished the rest of the trip without any further complications.

After I got home I continued to have these stomach aches off and on for a month. Because I am a stubborn person I refused to see a doctor thinking it would all go away. My philosophy is to see a doctor when death is imminent and that is exactly what happened. At a family gathering at my sister’s house I passed out once again due to the pain and she drove me to urgent care, which upon performing a quick medical check referred me to the local hospital emergency room.

Long story short, I had some weird and rare form of appendicitis (I can’t recall the exact medical term) where it would flare up constantly and leak dangerous fluids into my intestines. After two one-week long hospital stays, a colonoscopy and $100,000 in medical bills (doctors and hospitals love to milk great insurance plans…now you know why I hate going to the doctor), I was back to somewhat normal, but most of 2008 turned out to be a bust for my photography goals.

I hope this trip to the Grand Canyon will be much more pain free, at least I will be traveling a little lighter since I’ll be without an appendix!